What a great experience! In fact this ride was one of the favourite events I have done! Last October I ran the Lincoln Half Marathon, I ran with a friend of mine, supporting them run their first half marathon. What I enjoyed the most was the fact it was purely just for the fun of it. Paris in 24 hours was just the same!

The event was organised by a bunch of guys from DBS data, and what a cracking job they did. There were 14 guys and 1 girl. Some of the guys could have jumped on their bikes and ridden straight back. For others among the group this really was the pinnacle of their cycling achievement. I rode with a group of 9, and what a great pleasure it was, a real “one for all” mentality. We amassed 9 punctures between us, I think one of the guys managed to get 4, I am not sure how that is possible but it was!!!

We left London at 4pm on a Friday – Not entirely sure this was the optimal time to do so; I have never seen road rage like it! One guys was held up for about 7 seconds and went hopping mad, unfortunately that same poor guys is likely to die 10 years prematurely because the self inflicted stress and anger he must live with. A bus driver taught me 4 new lewd hand gestures because I robbed 1 meter of road from him! Being a Yorkshire country lane cyclist London rush hour was an experience.

Fortunately it was not too long before we reached the open country. After nearly 5 hours of biking we reached the south coast, rolled onto a ferry and tried to get 2 hours sleep lying on the floor in the public area of the ferry. I picked a spot under the main stairs on the aft deck, closest I have come to feeling homeless curled up in a sleeping bag under a staircase.

We rolled off the boat into Normandy darkness with the goal of reaching Paris by 4pm. Riding a direct route to Paris you don’t end up on the most scenic of roads but as cycling is the French national sport the divers are far more understanding and to be fair it was still a great route.

As the hours and the miles rolled by I became increasingly impressed with the group of people I had the pleasure to ride with, smiling through the pain and enjoying the moment and their achievement. A few of the guys were riding for charity and it turns out more that £11,000 was raised, helmets off to you guys, you are a real inspiration.

The most painful part of the whole experience came at lunchtime, dreaming of fresh French bread, cheese and maybe some meat, unfortunately the consensus of opinion was lunch should be had at McDonalds!!!!! 14 days on I am beginning to feel the disappointment subside!

We made it to Paris. Paris made London feel like a small town, I am not sure if it was fatigue and 170 miles in the legs but Paris just felt mad!

As a die hard pro cycling fan it was fantastic to ride up the Champs-Elysees, a cycling experience I will never forget weaving between the traffic on the cobbles – crazy, crazy, crazy. I think my bike handling skills improved more than my fitness on this trip to Paris. 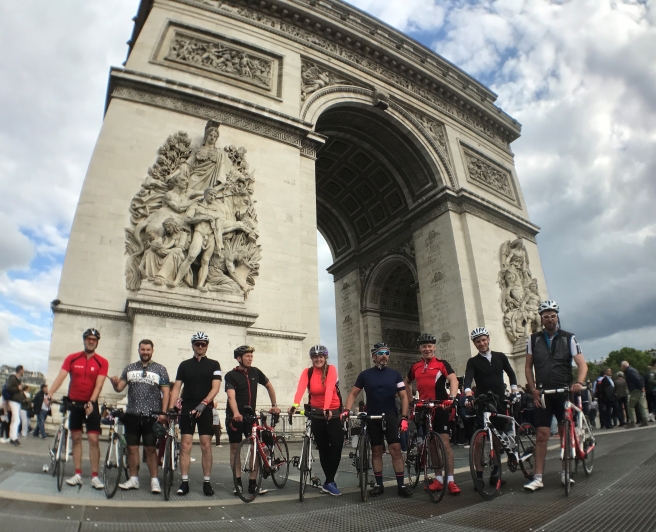 Note to self because my mate Alun had driven over to Paris for a little jolly and to be as great a support as ever, having his range rover at the finish line I was able to dump my bike, get to the hotel and get a quick shower. This meant we made it to the celebration dinner one hour before everyone. 2 pints of beer on an utterly empty stomach felt like 6 or 7! I am not totally sure what I had to eat that night, but I am sure it was great! 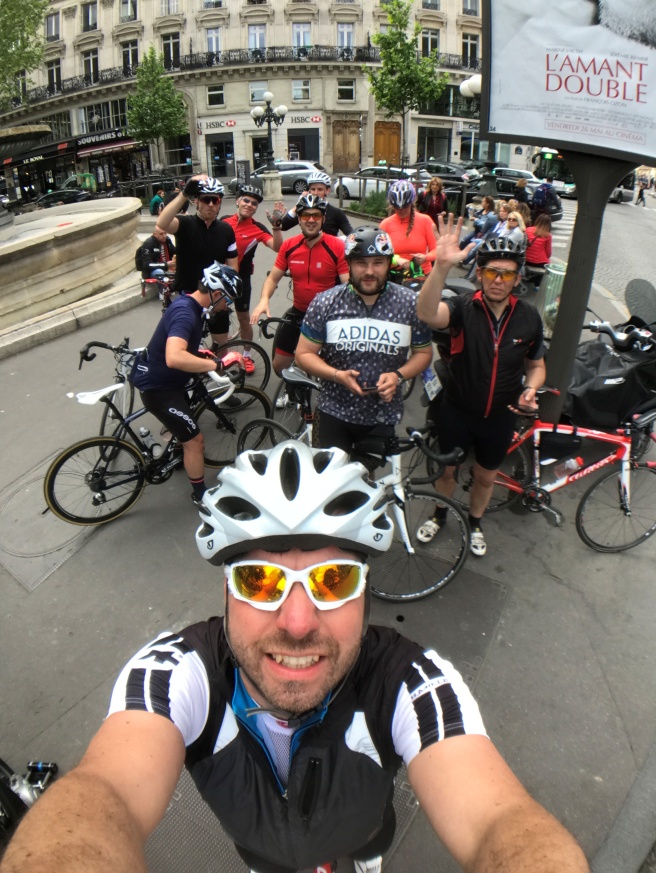 View all posts by Paul Kemshell